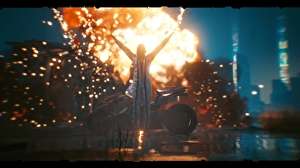 In the video below, we see the feature in action. It’s pretty in-depth, with various sliders available within the camera, depth of field, pose, effects and stickers options.

You can pause the action even in the heat of battle, which we see in the video, and change V’s pose from a variety of category-based presets, including “roundhouse shot to the face”, “with a precision rifle”, and “V for Victory”. You can even change V’s expression from a number of options, such as “boredom”, “satisfaction”, “happiness” and “fear”. In one section we see the player take a shot right after causing an explosion for dramatic effect. I imagine I’ll spend a decent amount of time creating some snazzy Cyberpunk wallpapers.