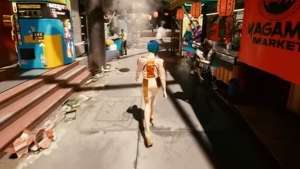 CD Projekt set tongues wagging when it revealed Cyberpunk 2077 would be a first-person game and not a third-person game like its own Witcher series. Now, perhaps inevitably, modders are working on a third-person mode for the game, and the early signs are promising.

Leading the Cyberpunk 2077 in third-person charge is modder Jelle Bakker, whose “TPP MOD WIP third-person” works well in certain situations, such as walking the Night City streets. Grab it from Nexus Mods.

There are a few hoops to jump through in order to get the mod working. For a start, you need to download Cyber Engine Tweaks and install it. And it’s worth noting there are two third-person mods available: one for male and another for female V. Once installed, drag and drop the mod’s plugins folder with the plugins folder within Cyber Engine Tweaks, and you’ll be good to go.