A new report has given us a deeper insight into the development and launch of Cyberpunk 2077, with comments from the studio challenging the contentious write-up after its publication.

According to Bloomberg, Cyberpunk 2077’s development was even more troubled than the studio let on – even in spite of the months of delays the game eventually suffered.

A massive new report over on the site (protected by a paywall) dives into the nitty-gritty of the game’s troubled development, revealing tensions between the development staff and CD Projekt’s management. One developer told Bloomberg that working on the game was like “trying to drive a train while the tracks are being laid in front of you at the same time” and that “[staff] expected the game to be ready in 2022.”

The Bloomberg report also infers that the Cyberpunk 2077 demo that was shown off back in 2018 was “almost entirely fake”.

“CD Projekt hadn’t yet finalized and coded the underlying gameplay systems, which is why so many features, such as car ambushes, were missing from the final product,” Bloomberg noted of the demo. “Developers said they felt like the demo was a waste of months that should have gone toward making the game.”

CD Projekt studio head Adam Badowski has responded to Bloomberg and challenged that view of events in a follow-up statement, written last night (Saturday, January 16). Badowski says that the demo was always labeled a ‘work in progress’ and that features that appear in the demo but not the final game are missing thanks to “the creation process”.

“Our final game looks and plays way better than that demo ever was”, he says in the statement.

I’ve read your piece and tweets, thank you for the read. I have some thoughts. https://t.co/T3qACdrnwM pic.twitter.com/wuzy5lXoqQ

Elsewhere, another damning revelation from the report suggests that the game actually began development back in 2016, despite the announcement of the title in 2012. This is mostly due to a massive overhaul of the project when studio head Adam Badowski took over as director of the title and shifted the entire game from third-person to first-person.

This may give some insight into why the staff didn’t really believe the game was ever going to be ready for its 2020 launch window – and that’s something Badowski didn’t address in his quote tweet statement responding to Jason Schrier and the Bloomberg report (alongside the allegations of intense crunch in the final months leading up to release).

The report follows on from a video message published by CD Projekt co-founder Marcin Iwiński, who offered a narrative explaining the events leading up to the disastrous launch of Cyberpunk 2077 and its slipshod PS4 and Xbox One version. Iwiński blamed the game’s massive scope, noting the “multitude of custom objects, interacting systems, and mechanics” played a part in making the game feel underwhelming and broken on certain platforms.

As per the Bloomberg report, though, that’s not entirely true – developers at the studio were acutely aware of issues before launch, and CD Projekt management simply dismissed concerns about the title’s performance on last-gen machines that were raised by staff.

The response to the game so far has led both Microsoft and Sony to pull the game from sale on digital storefronts until issues are resolved. CD Projekt Red has published an FAQ on the game’s official site, providing an update on free DLC, and the promised PS5 and Xbox Series X/S patches.

The studio has assured the public that developers will not have to engage with mandatory crunch again in order to provide these updates.

“The team is working to bring relevant fixes to the game without any obligatory overtime. Avoiding crunch on all of our future projects is one of our top priorities,” the studio said (though it’s worth noting that crunch in the games industry is rarely ‘required’, it’s more often ‘expected’).

CD Projekt may face a fine following Polish consumer protection investigation into Cyberpunk 2077. Whether the studio will be able to repair the damage that’s been done to its reputation during the launch of its latest RPG remains to be seen. 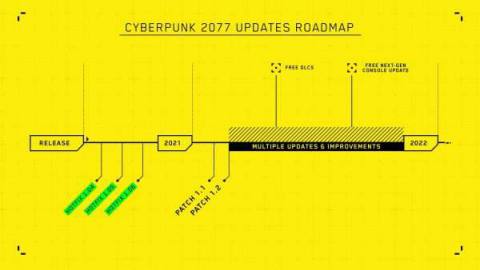