Through the terrible power of 2020, Cyberpunk 2077 has gone from capping off the last generation to being one of the first huge games of the next – as if the expectations weren’t high enough already.

Between delays and a hype cycle that’s lasted the best part of a decade at this point, CD Projekt Red has the impossible task of making good on all the blanks filled in by 8 years of eager imaginations. The scale of Cyberpunk 2077 and Night City is vast, as is its level of detail. But at the same time, it’s definitely not what I expected.

Personally, I didn’t appreciate just how much of a shooter it was going to be. Outside of the crackling chit-chat, it’s all-action, all the time.

Throughout the main quest lines and side stories, you’re always busting into some dive bar, seedy basement, darkened alleyway or the like to steal a laptop, rescue a corpo’s prisoner, or take out a cybernetically-enhanced gangster who’s pushed their luck a little too far. 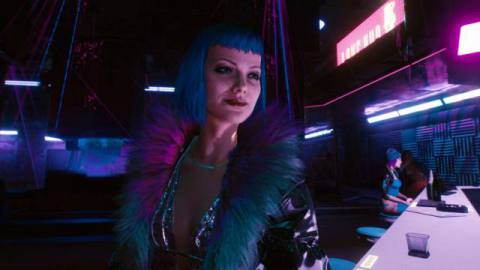 And while you can opt for a quieter approach, the at times finicky stealth – where you can sidle right up behind a goon and not have the prompt to grab them appear properly – makes it much easier to barge in with a foghorn and pick up the pieces later.

In fact, stealth is the weakest part of Cyberpunk’s action, and doesn’t feel that viable until you purchase a couple of specific and entirely optional upgrades which allow you to throw knives and slow down time when you’re about to be spotted.

But while stealth takedowns and kills have just a couple of animations, shooting is mercifully much better – tight and twitchy right out of the gate, of a quality and speed which is rarely on offer in games with a role-playing focus.

The way Cyberpunk’s systems are built means a lot of its variety comes from the constant loot carousel. You’ll be pawing through granular stats to switch to something with 0.3 more DPS after nearly every fight. So while you’re facing similar targets a lot, you’re doing it with a different toolkit each time. Once you find something that works for you, crafting skills can be used to upgrade a favourite gun or craft a familiar replacement. 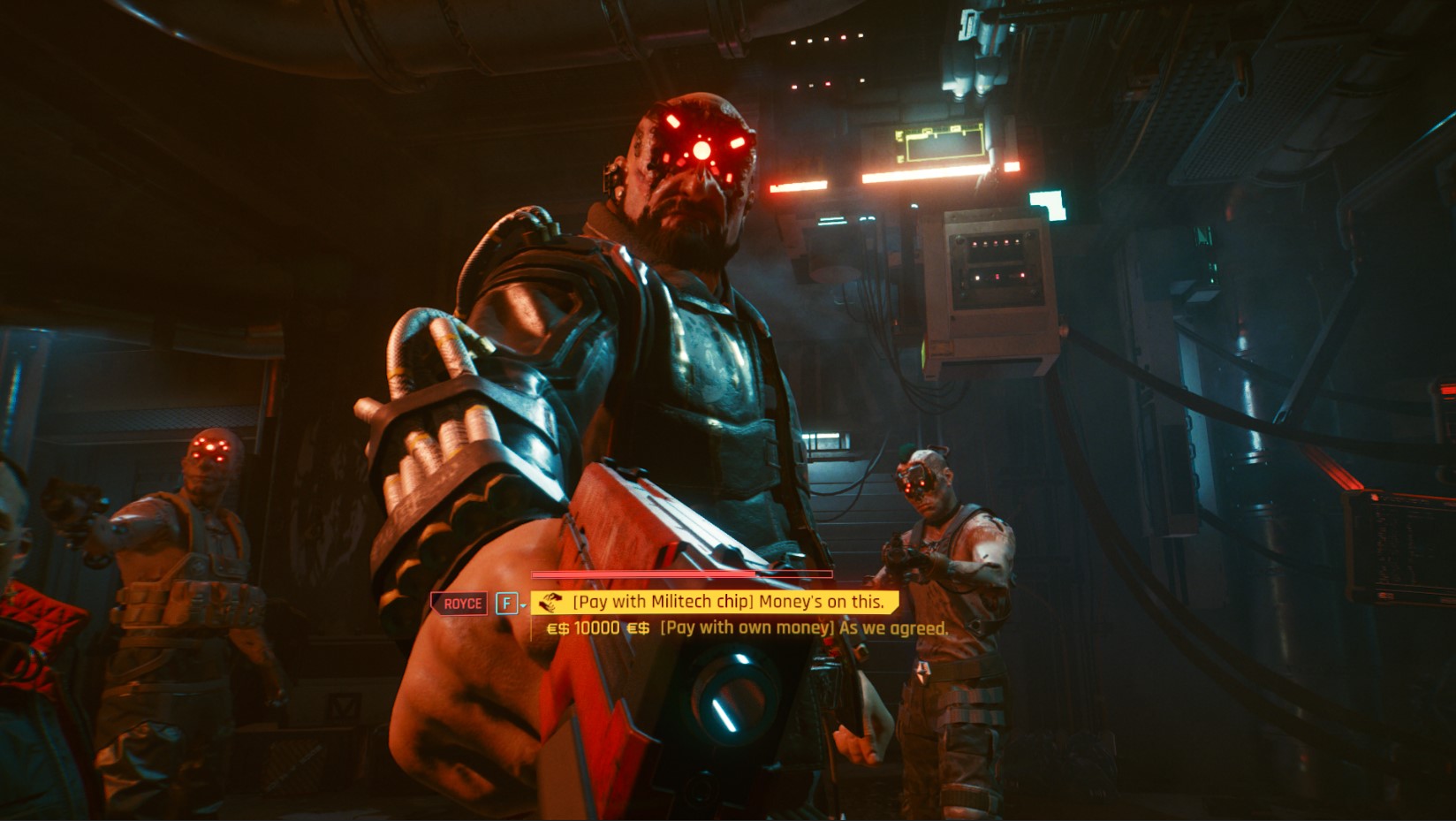 All the weapon types you’d expect from a first-person action game are here. There’s shotguns, automatic pistols, revolvers, sniper rifles, SMGs and so on. There’s also lethal bladed and non-lethal blunt melee weapons, plus some functionality-based subdivisions within guns like ricocheting Power, auto-locking Smart, and charge-up Tech firearms – each with multiple brands and skews of equipment within them.

All of this is said while neglecting the universe-defining netrunning Quickhacks, and top-end Cyberware like forearm mounted Mantis Blades. Through expensive augmentations you can make yourself a weapon, able to jump higher or chop people to mincemeat with just your bare hands. So there’s genuinely a huge amount of choice, and practically every weapon at your disposal feels well-designed in terms of booming sound, futuristic look, and weighted heft.

With the mountains of attributes to deliberate between, perks to sift through, and buffs to frown over, Cyberpunk 2077 is full of these complicated systems. Dark screens dense with tiny text and percentages – much like the Mutagens in The Witcher 3 – that can feel overwhelming until you just give in and spend your points willy nilly. 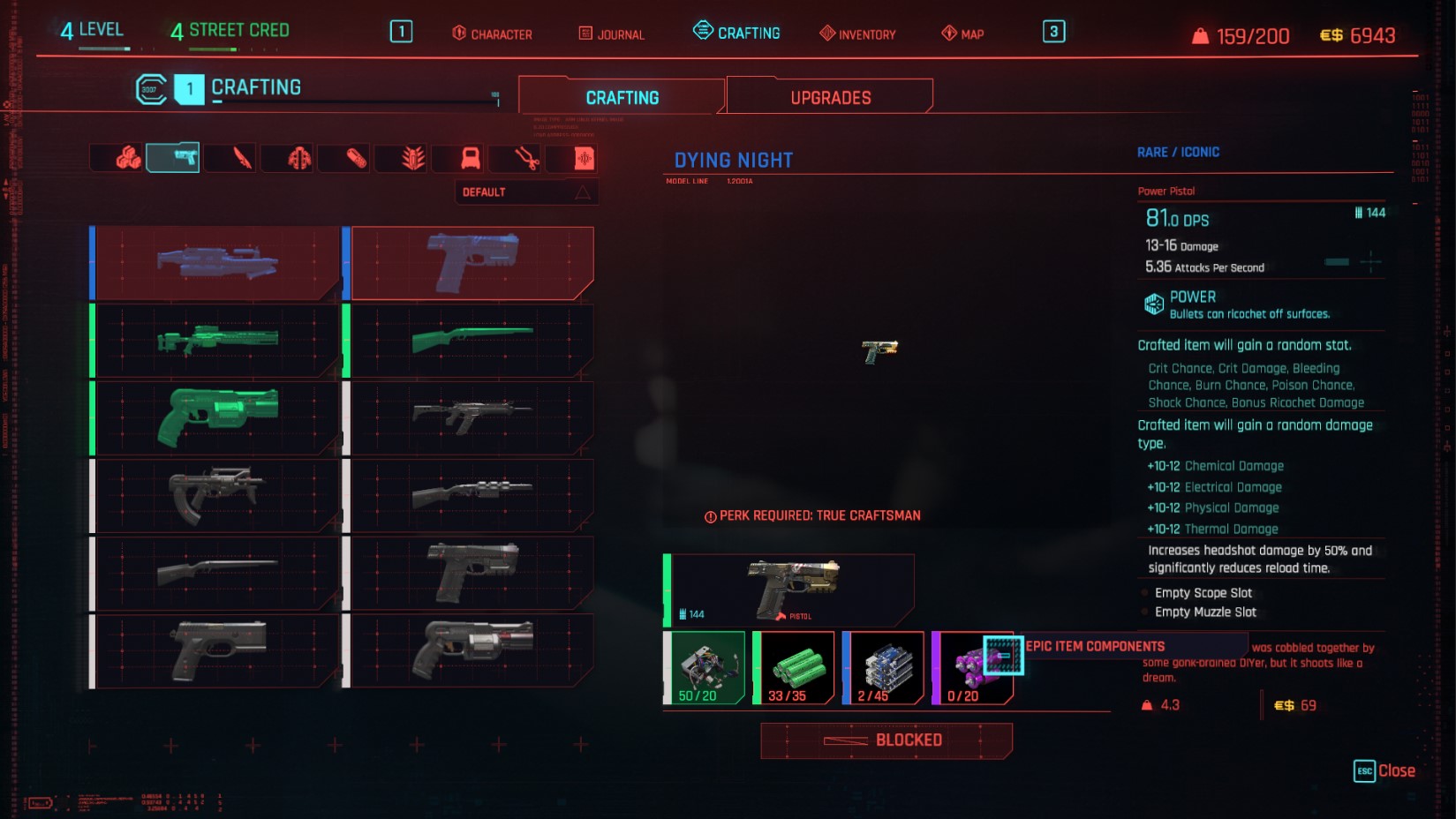 In this sense, Cyberpunk might be a game that’s enhanced in replays, when a knowledge of the skills available will allow you to push towards a more specific build. Late-game skill resets are possible, but are costly.

So although they’re not the best explained, there’s a lot of experimentation to be found in feeling your way forward.

But while these systems have the kind of sprawling depth befitting of such a massive game, they don’t do a huge amount for role play, and that’s another front where I feel like the hype has diverged from reality.

Go in expecting to change much more than your wang in the character creator and you’re going to be disappointed. There’s only two body types – one masculine, one feminine. You can change V’s face to your heart’s content, but they’ll always have the same body build. Within the story, in truth V is as much a set character as Geralt in the Witcher, and you’re more guiding their choices than fully designing your own person. 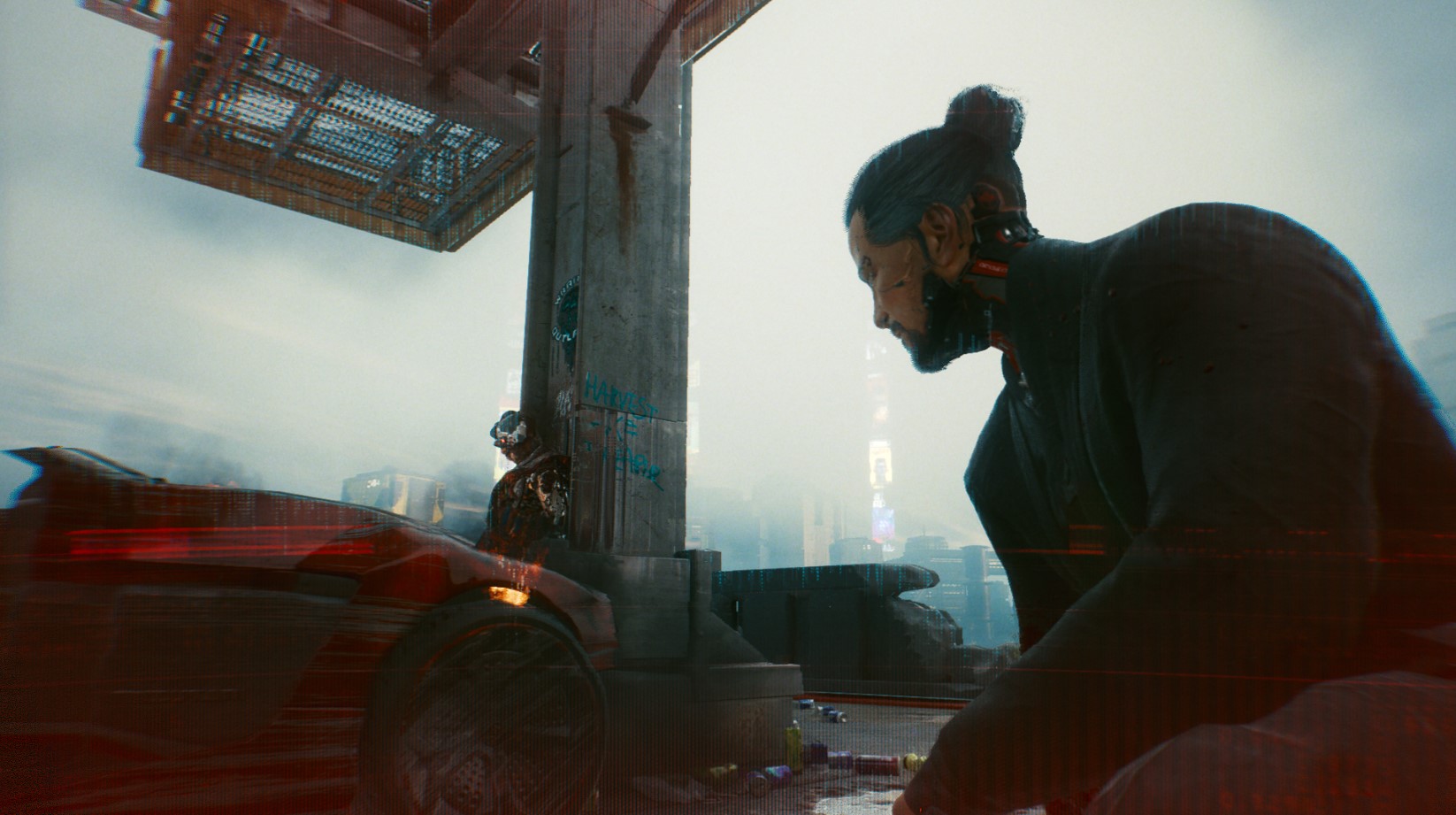 There’s obviously a limit to the kind of control the player can have over a cohesive story, and a lot of the time it feels like – especially in the early game – you’re given the illusion of choice or power over smaller plot points, rather than a defining say.

There are a lot of really frenetic and intense set- pieces that just wouldn’t work without the game funnelling you towards them, so I feel like the decision to focus on a more closely designed narrative is one that really works – but again, it’s about managing expectations.

That’s not to say it’s totally static though. Some quests can be completed in a non-linear manner, and dialogue will acknowledge that and other changing circumstances. Quest givers will frequently reference how you completed a particular quest in their dialogue. So even though, most of V’s dialogue choices don’t amount to much other than role-playing flavour, the level of fine detail in touches like this is impressive in a game so large.

Another easy comparison is with Fallout 4. You’ve got a created but fully-voiced character brushing shoulders with different factions, each struggling for power within a city state that is almost a character in itself. A lot of your role play is coming from the equipment and clothes that you collect, and you explore the wackier side of dystopia in lighter side missions.

And there are a lot of side missions. Whether it’s action-focused Gigs for the many fixers throughout Night City or chattier stories with the varied roster of secondary characters, there’s an incredible amount to get lost in.

It’s easy to see CDPR took the adoration of The Witcher 3’s side quests seriously, and there’s loads of easter eggs to hunt down across the gleaming high-rises and dark alleys of Night City.

The architecture of Night City itself is one of the best parts of Cyberpunk 2077. The sense of scale and verticality achieved by the first- person perspective makes it feel big, even if you can drive from one end of the game world to the other relatively quickly.

The size of the world and how seamless it is can’t be overstated. The occasional elevator ride is used to hide loading, but they’re fast enough and spent in the company of in-elevator TVs playing Night City’s news and entertainment shows, so you don’t notice. 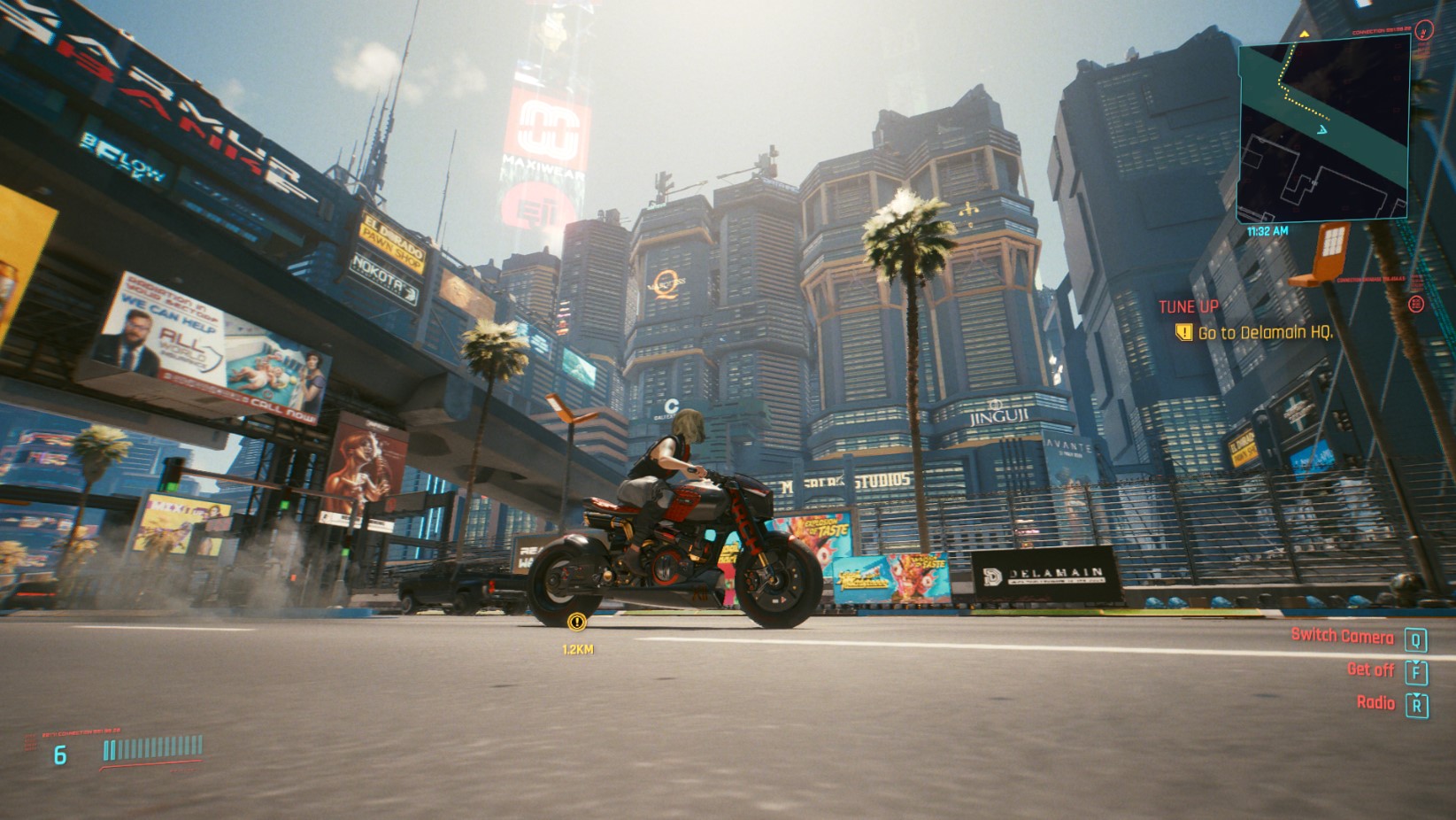 While the game has you on rails for the first few missions, it very quickly relinquishes that control and lets you completely off the leash. The prologue of the game consists of a few hours’ worth of main story missions in only one district of the map before you see that ‘Cyberpunk 2077’ title card, but it’s easy enough to get lost enjoying side content and not see that title card until five or ten hours in.

The crowd density, in particular, is often immense, but this does seem to come at the expense of AI, and the in-game reactiveness of the world looks to be tuned towards giving you a smoother ride as a result. For instance, shaking the cops after starting a firefight in the street or mounting the sidewalk as you check your phone is just a matter of burning a few blocks down the road. They never put up much resistance.

Scale is the main buzzword, then, but look a bit closer and the details and ambience of the world has very obviously been pain-stakingly crafted. There’s an excruciating, shocking level of detail used to depict the grimy, hyper-sexualised, hyper-corporatised dystopia of Night City. In this Cyberpunk feels relatively unmatched, sitting alongside the efforts of Rockstar Games in the immersive properties of its world.

Other issues that’ve been criticised pre-release, like a reliance on stereotypical representations of non-white characters, also run through the whole game and its giant city.

In the midst of such intense anticipation and scrutiny, it’s easy to get carried away with what Cyberpunk 2077 could have been. The final experience might be more familiar than many predicted, with plenty of elements that aren’t perfect, but it’s dripping with detail and engaging stories. With so much to see and do, Cyberpunk 2077 is the kind of RPG where you blink and hours go by, which is just what we need to finish off 2020. 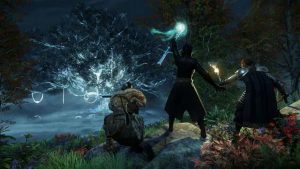