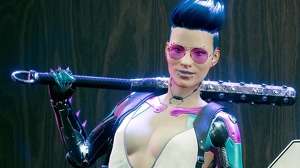 In the world of Cyberpunk 2077, you can swap out your boring, run-of-the-mill human bones for an endoskeleton at the drop of a hat. It’s so quick and painless, you won’t even know it’s happening. No, seriously: when you decide to install some cyberware at the Ripperdoc, almost nothing happens. The lack of a cutscene or appearance change for most of Cyberpunk 2077’s cyberware has disappointed a fair number of players, myself included – and while visible changes appear with a couple of hand and arm mods, even these are fairly subtle. Where are the big red mechanical arms I was expecting? Why can’t I have that NPC’s robot legs?

Over the last few weeks, modders on Nexus Mods have been hard at work opening up further customisation options for players, be it the ability to change your haircut and appearance mid-game, or access some of the fancy clothes normally locked to Night City’s NPCs. There’s even a way to get your hands on some Trauma Team gear. But the thing that excites me the most is this: modders have created several different ways for you to visibly modify your body.