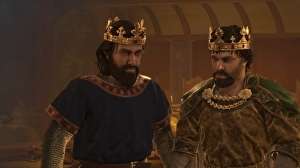 Crusader Kings 3 will soon let you resolve grudges, disagreements, feuds, and other miscellaneous disputes in a more up-close-and-personal capacity, when elaborate one-to-one duels are introduced as part of the medieval grand strategy game’s next free update.

Building on Crusader Kings 2’s Duel system, Crusader Kings 3’s next update, known as version 1.3, will let players challenge rivals to fully interactive one-to-one combat scenarios, enabling them to select from a range of attacks and special moves until an agreed victory condition – from landing a light scratch to a mortal blow – has been met.

Developer Paradox explains the new system in extensive detail over on its blog. The gist, however, is that duels – which can be unlocked via the Chivalry lifestyle tree’s Stalwart Leader perk – will play out over two to four rounds, with each new round presenting players with a choice of three distinct combat moves from an expansive pool.