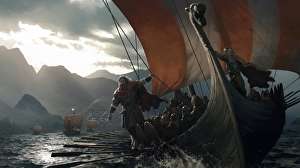 Developer Paradox’s superb Medieval grand strategy game Crusader Kings 3 will be getting its first chunk of paid DLC – the Norse-themed Northern Lords Flavour Pack – this Tuesday, 16th March, and it’ll be accompanied by a significant free update on the same day.

As its name implies, the Northern Lords Flavour Pack is a smaller-scale offering rather than a fully fledged Crusader Kings 3 expansion, and is designed to make the era’s northern kingdoms – and the characters within – feel more distinct.

It will, for instance, introduce a range of new Viking-themed cosmetics, including new clothes and hairstyles for characters, plus new ships, units, and holding models for the map.