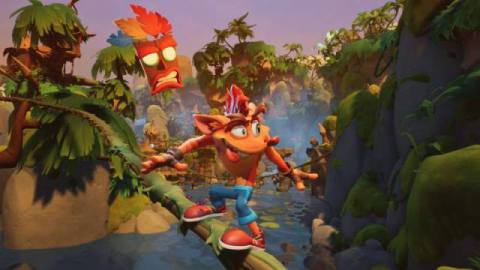 The early Crash Bandicoot games of the ‘90s were partially experiments in how to navigate 3D space. Crash didn’t freely traverse an open world; he marched down tightly designed digital tunnels. The camera zoomed in and out of the action and panned around the character, which seemed novel at the time. However, Crash’s movement was limited in ways that seem restrictive by today’s standards. In some sense, Crash Bandicoot’s gameplay was a product of those limits of technology as much as it was any single creative vision. And yet, those limitations helped produce one of 1996’s most memorable platformers. Crash Bandicoot 4: It’s About Time proves the classic formula still works in 2020.

With Crash 4, developer Toys for Bob sends Crash and his sister Coco on an adventure through space and time. In one set of levels, I battled seahorse-like pirates while dodging cannon fire. In another, I bounced off dinosaur heads and over creeping lava flows. In yet another, I navigated a busy skyway, miles above a futuristic metropolis. Every level is full of wacky sights and sounds that made me smile, and I couldn’t wait to see where I was headed next.

However, this experience is more about the journey than the destination, and Crash’s platforming remains faithful to his early adventures in ways both good and bad. On one hand, the controls are more responsive than ever, and I loved bounding from one precarious platform to the next while smashing crates full of Wumpa fruit. On the other hand, Crash 4’s precise platforming sequences demand practice. The thrill of mastering Crash 4’s most challenging levels is rewarding, but some of the deadliest pitfalls come out of the blue, which means you have to replay sections over and over again to memorize each level’s layout. A “modern” difficulty allows you to play with unlimited lives, which removes some of the sting, but distant checkpoints still tested my patience, as they forced me to routinely jumped through a familiar hoops in order to return to the platforming section that tripped me up.

While Crash’s platforming feels like it fell out of a time warp, this bandicoot does have a few new moves. Throughout his journey, Crash collects a handful of Quantum Masks that grant him new superpowered abilities. For example, one mask allows you to invert gravity so Crash can run along the ceiling, while another lets you transform into a spinning vortex that floats over large chasms. I especially liked the Kupuna-Wa mask, which slows time, so I could platform across falling objects and dodge fast-moving projectiles. These masks pop in and out of the game at predetermined times, so you can’t access them whenever you want, but I was always excited when one showed up. Even more, I’m impressed with how the Quantum Masks add new wrinkles to Crash’s classic gameplay in a way that feels true to the spirit of the franchise.

In addition to the Quantum Masks, Crash and Coco are joined by a few unlikely cohorts, such as Doctor Neo Cortex, Dingodile, and Tawna. These new characters have their own unique movesets, which they display in a handful of dedicated levels scattered across the game. These special levels offer a refreshing change of pace. For example, Cortex can’t double jump, so his levels center on using a gun to transform enemies into spongy platforms that launch him into the air. However, my favorite newcomer is Tawna, an alternate-reality version of Crash’s love interest from the first game. Tawna comes equipped with a grappling hook that allows her to zip across massive gaps and smash crates from a distance, and I always jumped into her special levels the second I unlocked them.

In many ways, Crash Bandicoot 4: It’s About Time feels like a game that shouldn’t work. Single-player, mascot-driven, hardcore platformers are few and far between these days. Moreover, most franchises born in the mid-‘90s have had to continually reboot themselves to match the tastes of an ever-changing market. At its core, Crash 4 remains rooted to the old way of doing things, but that’s not a bad thing. The visuals are cleaner now and Crash has a few new gimmicks, but if you squint, Crash 4 looks like the same old platformer you’ve always loved. 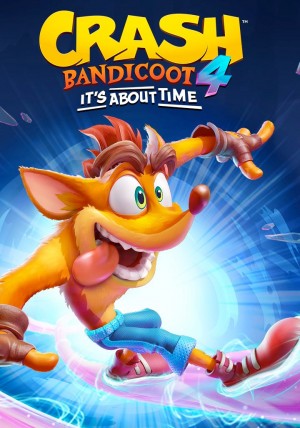 Summary: Now that Crash Bandicoot 4 has arrived on PlayStation 5, Xbox Series X, and Switch, read how the game’s challenging but fun platforming and entertaining new mask abilities make it a successful return to form.

Concept: A return to the unique brand of ‘90s platforming that put Crash Bandicoot on the map

Graphics: The vibrant, colorful visuals really pop, and enemy designs are goofy in a charming way

Sound: This energetic soundtrack is fun and upbeat, which is good since you’ll be listening to some tracks on loop for a long time

Playability: Controls are tight and precise, which is necessary given the pinpoint maneuvering required in some levels

Entertainment: Mastering Crash’s aerial acrobatics is highly rewarding, but the journey to get there is occasionally frustrating