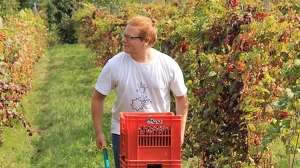 “There is a thin line between courage and stupidity.”

That’s the line that intrigued me. It’s one of the first things you see when you load Hundred Days up, even before the main menu. But why? This is a gentle game about making wine. A game about taking on an abandoned winery in Italy and returning it to prosperity. It’s part card game, part management game, part puzzle game. What business does it have with philosophy? Unless – and this is what gnawed at me – unless there was a secret behind the game I couldn’t see.

Yves Hohler lived in Switzerland until he was five years old, and his parents led an unconventional life. They would move around a lot, between Switzerland and France, carting him and three other siblings around as they found work picking herbs on farms. Have you ever eaten those nice Ricola sweets? They come in a bright yellow packet that looks like it should have cigarettes in. His parents would pick the herbs for them, as well as strawberries for yoghurts. They did it because they liked the lifestyle. “My parents are the last hippies on Earth,” Hohler says, affectionately, I think. “And what they wanted,” he tells me in a video call, “[was] that we grow up on land, not in a city.”