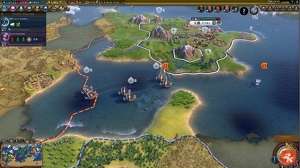 Firaxis has announced the sixth and final DLC pack in the Civilization 6 – New Frontier Pass.

Firaxis is saving a deep dive on Portugal for a future update, but as you’d expect the civ will revolve around naval gameplay, particularly maritime exploration and trade – something not a lot of other civs specialise in. There’s more in the video below: