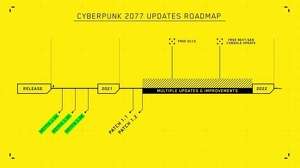 CD Projekt co-founder Marcin Iwiński has addressed the events leading up to the disastrous launch of Cyberpunk 2077 last year in an attempt to explain how the game’s widely lambasted Xbox One and PlayStation 4 versions were released in such a poor state.

“Based on [our] legacy of genuine and honest communication”, says Iwiński in a new video,” you’ve trusted us and pre-ordered our game, and despite good reviews on PC, the console version of Cyberpunk 2077 did not meet the quality standard we wanted it to meet. I, and the entire leadership team, are deeply sorry for this and this video is me publicly owning up to this.”

According to Iwiński, problems with the console release stemmed from Cyperpunk’s “huge” scope – specifically the “multitude of custom objects, interacting systems, and mechanics” all condensed into a single big city and “in a relatively loading-free environment”.