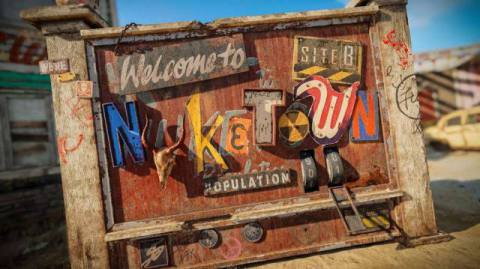 And Activision is trying to nuke it from orbit.

THERE MAY BE SPOILERS AHEAD.

Redditor PimpOutMyPC, who uploaded gameplay footage of Nuketown to their YouTube channel, claimed they glitched into a custom game in order to get into the map.

The Easter egg involves shooting the heads off all the mannequins – previous Nuketown Easter eggs have worked in a similar way.

Doing so in Black Ops Cold War’s Nuketown, which is set in a post-apocalyptic 1984, flips the visual style, applying a blue ’80s-themed digital filter to the graphics. A cool synthwave track kicks in, too. It reminded me of Ubisoft’s wonderful Far Cry 3 spin-off, Blood Dragon, complete with a purple haze across the sky.

Activision released an official video for Nuketown yesterday, and clearly doesn’t want the map to be seen ahead of its release. Already PimpOutMyPC’s video has been scrubbed from YouTube, with a note to say it received a copyright claim from Activision. But of course the internet never forgets.

And here’s the Easter egg from Black Ops 3’s Nuketown: