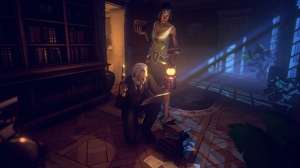 Asmodee Digital’s video game adaptation of the hugely popular Lovecraft-inspired Arkham Horror board game series isn’t too far away now – an Xbox, PlayStation, Switch, and PC release is currently pencilled in for “Q1 2021” – and we’ve finally been given a first proper look at the narrative-driven tactical RPG in a newly release gameplay trailer.

Arkham Horror: Mother’s Embrace, as it’s known, was originally announced as an adaptation of Fantasy Flight Games’ other Lovecraft-inspired board game series Mansions of Madness back in 2018, but it received its new name – and a new developer, Artefacts Studio – last year.

Despite the development switcheroo, Arkham Horror: Mother’s Embrace is still very much along the lines of Asmodee’s original announcement, setting players loose in a spooky old mansion circa 1926, where the heinous murder of an astronomy professor has occurred.