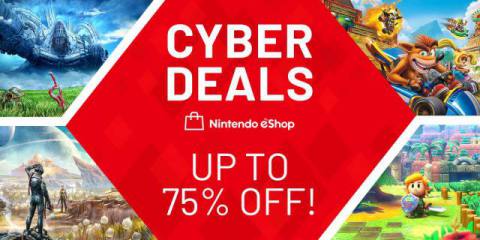 Digital titles will go on sale tomorrow at 3pm by up to 75 per cent.

Nintendo has just confirmed via Twitter that a big Black Friday Switch sale is going live tomorrow at 3pm CET (that’s 2pm GMT), covering a number of digital titles on the eShop until December 3rd.

We’ve seen a few Nintendo Switch Black Friday deals pop up so far, with retailers like Currys, Amazon and Aldi getting in on the action, but we hadn’t seen much pop up from Nintendo directly until now.

Celebrate digital games on Nintendo #eShop and save up to 75% in our Cyber Deals sale, starting this Thursday at 15:00 CET! pic.twitter.com/BjPfmmjggD

The sale will bring us discounts of 33 per cent on first-party games and we can expect up to 84 per cent off on 3rd party titles too. It’s unclear just how many games will be discounted, but following this announcement, a subsequent press release also confirmed several highlights for this sale. We’ll keep you updated as we learn more, but right now, the top highlights include:

Keep an eye on the Jelly Deals Twitter too, where we’ve been posting a range of Black Friday deals throughout this entire sales period.