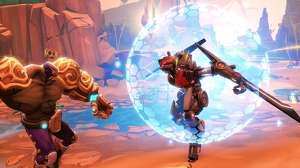 With its servers deactivated, Battleborn is now no longer playable in any form – even single-player. It had already been removed from digital storefronts.

Battleborn was reasonably well-received when it launched for PC and consoles in 2016, with many praising its ambitious, inventive blend of first-person shooting and MOBA-style action, even if the combination didn’t always land in practice.