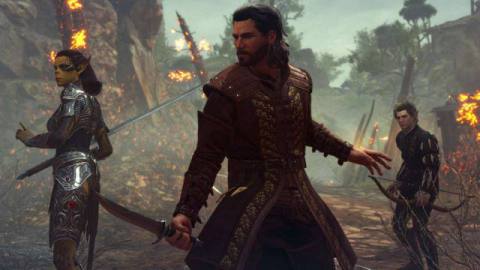 When a game goes into early access, the core aim is to gather player data in order to learn how to make the experience better holistically. We’ve recently seen this work out to tremendous success with Supergiant Games’ Hades, which spent two years gathering feedback in order to hone its roguelike gameplay loop to near perfection. Baldur’s Gate 3 has only just started its early access journey – it has just a month under its belt so far – but those few weeks have already provided some very clear information about what almost every player loves to do.“They’re all horny, I can tell you that,” laughs Swen Vincke, founder of Baldur’s Gate 3 developer Larian Studios. “I think we have one percent [of players] that’s not interested [in romances], so we’ve put a lot of effort into making sure the parts are there. So anybody who tells you the opposite, I can tell you that’s not true.”

Baldur’s Gate 3 is the first game from Larian in several years that has been made without crowdfunding. Despite that, the studio has still opted to use the common Kickstarter method of going to early access before a main release. “It was never in doubt,” Vincke says. “We’ve seen what early access did for Divinity: Original Sin 1 and Original Sin 2, and so we know how much a community can add to the game. That is the case already for Baldur’s Gate 3, so I think it was the right decision.”

Thanks to those successful forays into early access, Larian launched Baldur’s Gate 3 fully prepared with a suite of quantitative data tools. This software allows Vincke and his team to see practically everything players do, from who they romance to where they save their progress. That latter information helps show where players are ‘save scumming’; the act of creating a save file before a major moment or decision, and reloading it if the situation doesn’t provide the result a player would like.

Vincke notes that one moment in particular, where players must navigate a tricky dialogue encounter to save some children, is one that has experienced heavy save scumming. “It’s an emotionally laden moment, and people want the dice to go in a certain direction,” Vincke says. He recognises that the amount of players reloading to try to get a better outcome is something Larian can learn from. “We made [the dice rolls] hard, but maybe we can add extra role-playing options for players to get the same effect. It’s one of those things that we can pick up from seeing those behaviors of players.”

It’s not just in this situation that players are becoming frustrated with Baldur’s Gate 3’s dice rolls. The system – based on tabletop Dungeons & Dragons’ use of D20-based skill checks – has proven divisive in the BG3 player base. Many players are not used to a dice roll governing their successes or failures; random number generation (RNG) disrupting a sneaky attempt to deceive someone or foiling a heroic deed can feel at odds with roleplay. “There are people who have had difficulties with that,” says Vincke. “They want to be able to manipulate it.”

“We’ve only put the ‘evil’ and the ‘neutral’ companions out there.”

“We opted to just go pure RNG for the initial release in early access just to see what was going to happen,” he explains. “We see the people that have really bad luck, and they are really, really angry over it. So, we’re going to help them. We’re going to add modes to the game that are going to go with things like a loaded die, and that’s going to be a bit more manageable. We’ll still keep the option of having full RNG in there. We’ll experiment with that throughout early access, and see what we should make the default option. That’s one of the things that will be driven by the analytics.”

RNG isn’t the only thing that Larian has realised needs to be adjusted. “Giving players things to do at the beginning is something that we’ve been struggling with,” admits Vincke, referring specifically to the limited collection of skills and abilities a low-level character has access to. Once again, this is due to the Dungeons & Dragons ruleset from which Baldur’s Gate 3 is adapted; low level characters on the tabletop have very few combat options compared to a low level character in most digital RPGs.

“We’re coming up with some more answers,” Vincke teases. “We’re certainly going to add a few things for the opening moments of classes like the fighter, for instance.”

Elsewhere, player concerns will be addressed by the introduction of numerous new companion characters. “There’s been a group of people complaining about the fact that the companions are snarky and they have to have an opinion,” Vincke reveals. “But we’ve only put the ‘evil’ and the ‘neutral’ ones out there. We haven’t put any of the ‘good’ characters in yet, so I think that will balance that.

“I didn’t expect people to be that sensitive to how the companions thought of them, and the fact that we didn’t put the ‘good’ characters in there,” he admits. “I didn’t see that one coming. In hindsight, it’s cool because it means [players] care.”

With so many changes already set in motion due to player feedback, it’s easy to assume that almost everything in the current build is malleable. But Vincke notes that there is something that Larian won’t budge on: narrative choice. It’s easy to think that if the data suggests players don’t opt for certain choices, then there’s no reason to dedicate resources to them. That won’t be the case, though.

“The writers have a tendency of being good and not putting in the evil options,” Vincke says. “We had to actually force them to go through everything and put in more contrasting options so that they could put the evil ones in there.” It’s all about offering the players “real” choices, he explains – a variety of options falling all across the spectrum of morality, rather than just slight variations on ‘the good one’. “For choice to be there, you need to have the ability to do good and evil and things in between, and edge cases, and stuff like that. That is a modus operandi for the remainder of the game.”

Luckily for Larian, player data doesn’t contradict the studio’s MO. “You would be surprised at how many betrayed the Tieflings,” laughs Vincke, referring to a pair of characters you cross paths with early on. “I can see how many people slept with Minthara. That’s quite large, and to get there you have to be evil. There’s certainly people that have had no moral scruples.” (I have to confess that I am among those folks, as my Drow Warlock takes no prisoners).

One of the more difficult elements of developing Baldur’s Gate 3 with player involvement is that there are numerous different ‘camps’ of people interested in the game. There’s Larian’s long-term fans, who are crying out for there to be more ‘surfaces’ in the game (a mechanic used in the Original Sin games to create dynamic fire, poison clouds, oil slicks, and more). Then there’s players of the D&D tabletop game, who’d rather have surfaces removed all together. And then there’s old-school Baldur’s Gate fans, who want the real-time combat of the BioWare original games back. There’s a lot of people pulling in a lot of directions.

“I expect multiple flavors of Baldur’s Gate 3 to come out of modding.”

“I can imagine that we will never manage to find the balance that will please everyone,” says Vincke. But, there is a (sort of) solution: “The game will be moddable eventually, so people will be able to make their mods. I expect multiple flavors of Baldur’s Gate 3 to come out of that. Over time there will be probably a flavor that will appeal hopefully to everybody.”

But as for the flavour that the Larian team will create themselves? It’s actually closer to the general consensus of what players apparently want than you may imagine. “All of the things that people are suggesting were already on the list of things that we had to do,” says Vincke. “So they fit our roadmap. We are, to a large extent, in sync with our audience, I think. But there are things that we hadn’t thought of. So it’ll be interesting to see what they are going to add to the game.”

Divinity: Original Sin was in early access for almost six months before launch, and its sequel a full year. With the scope and scale of Baldur’s Gate 3, there’s no telling how long it will take to reach version 1.0, and Larian is taking an ‘it’ll be ready when it’s ready’ stance for now. It’s only been a month, so there’s still a long road ahead – but if the Original Sin games reveal one thing, it’s that Larian knows what it’s doing with early access, and Baldur’s Gate 3 will likely be better for it. The concrete details of what will be added next remain to be seen, but the promise of new companions, altered dice rolls, and more class skills are certainly signs that the team is listening to their fans. Quite how much of a thirst trap the next companion is, though, will signal how much attention has been paid to the horny ones.

Matt Purslow is IGN’s UK News and Entertainment Writer. Let him know what you think about Baldur’s Gate 3 by dropping a parchment note with the bartender at the Elfsong Tavern, who’s promised to pass it on. News Source