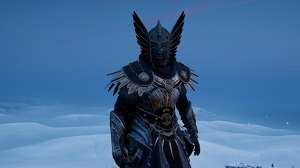 Well, that didn’t take long. Assassin’s Creed Valhalla has been out for less than a month, and PC players have already figured out how to access premium cosmetics for free – including some that haven’t even been released yet.

Over on Nexus Mods, users are sharing a table for Cheat Engine (free memory scanning software – download at your own risk) that allows players to gain access to sets such as the Berserker, Valkyrie, Draugr and Huldufolk packs on PC. I tried it out myself, and after a bit of tinkering found I had suddenly acquired pretty much all the premium packs, which would normally cost around 2000 Helix credits each to unlock (a pack of 2300 Helix credits costs £16.99, if you’re wondering). Or a lot of grinding for opals and waiting for Reda to sell each item individually, I suppose.

While this is already a little bit naughty, others have taken things a step further, using Cheat Engine to load currently unreleased items. On some forums users are sharing images such as this fiery wolf, along with Ezio’s Brotherhood Outfit, which has not yet been made available in Valhalla. Judging by the hash lists being shared online, it’s likely we’ll see further unreleased cosmetics posted to the internet in the coming days.