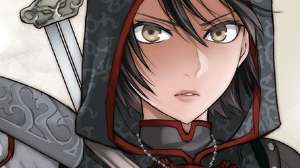 Fan-favourite Assassin’s Creed character Shao Jun will get her own manga, to be released in stores and online on 16th February.

Assassin’s Creed: Blade of Shao Jun chronicles the latter adventures of the character following her visit to Ezio seen in the short film Assassin’s Creed Embers.

Set in 1526 against the backdrop of a great political purge by Emperor Jiajing, the manga sees Shao Jun work on her own to defeat a mysterious group after the rest of her Brotherhood has been killed.