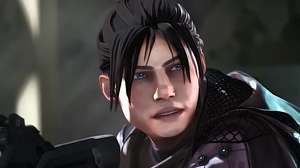 Poor Wraith – she’s already had her tactical ability tweaked and her iconic Naruto run removed entirely, but it seems all that still wasn’t enough to weaken the legend, as Respawn is now increasing the size of her hitbox.

Wraith has long been a popular pick in Apex Legends due to both her maneuverability and small size. Despite the introduction of the Low Profile perk to increase damage against her and other small legends – along with the removal of her Naruto running animation – it seems Wraith was still too tricky to hit, as her win rate “continue[d] to be at the very top as it has since day one”. As explained in the Season 8 patch notes, Respawn hopes to control Wraith’s power without nerfing her abilities, and one way to do so is by changing her hitbox.

“Wraith now has a slightly larger hitbox than her fellow small legends, but the changes stay true to her model,” Respawn explained. “As you can see in the before and after comparison, we’re adding some width mostly in the torso and leg areas.”