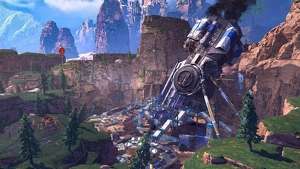 Apex Legends’ eighth season of content – also known as Mayhem – is almost here, and developer Respawn is readying for its 2nd February release with a brand-new gameplay trailer, showing off, among other things, the newly obliterated King’s Canyon map.

Season 8’s big addition, of course, is new hero Fuse – an Australian demolitions expert and Bonecage Champion from the planet Salvo who, as you might imagine, gets a substantial airing in the latest, unexpectedly 80s-styled trailer.

There’s a peek at new lever-action rifle The 30-30 Repeater, and it also appears to confirm earlier leaks from data miners that Fuse’s special abilities will include the use of his mechanical arm to toss stun grenades, as well as a devastating ultimate (reportedly named The Motherlode) that sees the massive cannon on his back come into play.