Festivale is a returning event in Animal Crossing: New Horizons, having previously been celebrated in City Folk and New Leaf.

It’s also likely to be the last special event in ACNH’s first year before we’re back to Bunny Day and Cherry Blossom Season in early April. There have been indications that further substantive content updates are planned due to the game’s success, but if you’ve been playing from the start, Festivale is still pretty symbolic of Year One rapidly drawing to a close.

Festivale would usually fall in the Spring in the northern hemisphere, which in Animal Crossing world officially starts somewhere between the 18th and the 25th of February. However, the real-world calendar is a factor here, and Festivale takes place the day before Shrove Tuesday (that’s Pancake Day to us Brits) — so this year, the big in-game day is February 15th. 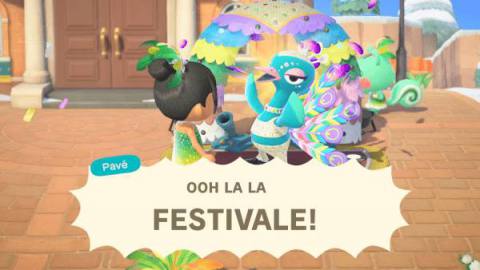 However, chilly temperatures shouldn’t be an issue, as in past Animal Crossing games the day of Festivale has come with a magical guarantee of clement weather — no snow or rain in sight.

Read on for everything we know about Festivale in ACNH so far, as well as what you can do to prepare for the big day:

What is Festivale in Animal Crossing: New Horizons? Who is Pavé?

Festivale is inspired by real-world celebrations like Carnival and Mardis Gras. Described by Nintendo as “all-day festival of color, costumes and craziness!”, Festivale is an opportunity for you and your animal friends to have some fun and celebrate the imminent turning of the seasons.

Past Animal Crossing titles have included candy exchanges and a variety of games during Festivale, but so far all we know for sure about the event in New Horizons is that you’ll be collecting feathers. You’ll then give them to Pavé in exchange for Festivale-related goodies. 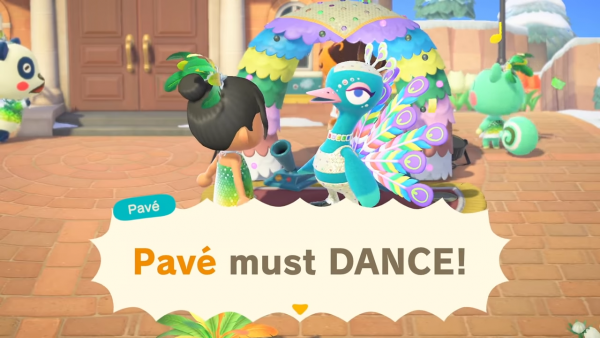 In case you haven’t had the pleasure in the past, Pavé is a flamboyant and exuberant peacock who sets up in the plaza on the day of Festivale. Much like Zipper on Bunny Day or Franklin on Turkey Day, he’s there to exchange your seasonal collectables for unique rewards like clothing, furniture, and recipes.

What are feathers for in Animal Crossing: New Horizons and where do I get them?

Feathers in Animal Crossing: New Horizons are a crafting resource. Like many other seasonal resources in the game — including snowflakes, maple leaves, and cherry blossoms — they are found floating through the air during a limited number of days. They can then be caught with the net. 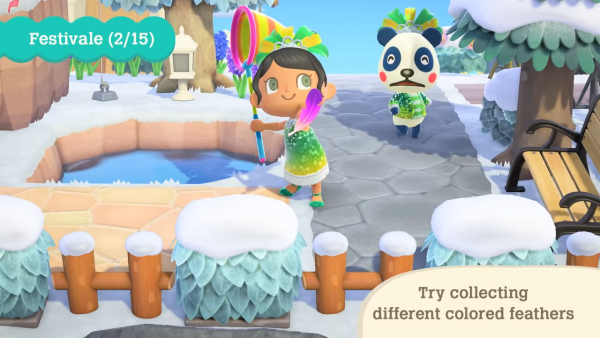 There are five colours of feathers in ACNH:

In addition to their value when trading with Pavé, feathers are required if you want to customise the new Festivale-themed furniture set. More on that below.

As of yet we don’t know when feathers will begin to make their appearance in New Horizons, but in the past short-lived seasonal resources have appeared around ten days before the event in question — so expect to see them any time now.

What special clothing, furniture, and reactions can I buy ahead of Festivale?

Starting on February 1st, you can buy Festivale-related clothing and furniture from the Able Sisters’ tailor shop and Nook’s Cranny, respectively.

These items will be available until February 15th, when they’ll go away until next Festivale. They’ll also be available in rotation meaning not everything will be for sale every day, so if you see something you particularly like it’s worth buying straight away. 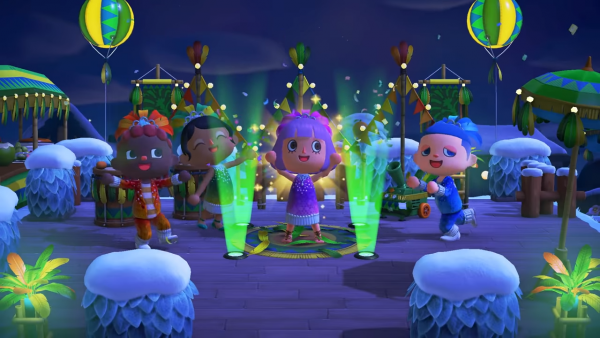 Festivale furniture items will be displayed on the seasonal items stand in Nook’s Cranny. After making your first purchase from this set, the Nooklings will direct you to look in the cabinet, where a new Festivale Reactions set is on sale. (You don’t need to buy any furniture to get the reactions, however; just look in the cabinet and they should be there already. It’s just the Nooklings trying to upsell.)

The set costs a hefty 19,800 Bells for four reactions (Feelin’ It, Let’s Go, Viva, and Confetti) but they are great fun — and let’s face it, if you’ve been playing ACNH for any amount of time since launch, you can pretty definitely afford it. Performing these reactions in front of special NPCs such as the Nooklings or Blathers will cause them to react in some cute and funny ways, so it’s well worth the cost.

There are nine items of Festivale furniture available to buy. They are:

With only one on sale per day and only 15 days in which to buy them, you can probably work out that some of these will only be in Nook’s Cranny once. Pavé might well be giving the same items out on the day of Festivale, allowing you to collect any you missed, but this isn’t guaranteed just yet.

Furniture items come in four colours as default — blue, green, red, or purple — and can be customised to change their colour. There’s also a rainbow colour scheme that can only be applied through customisation. Like other seasonal furniture sets, however, you won’t be using customisation kits — instead, you’ll need feathers of the desired colour.

Incidentally, it seems like the Festivale furniture for sale in your island’s version of Nook’s Cranny will be all one default colour — mine are always blue, but I’ve seen other players with all red items, for example.

There are three Festivale inspired items of clothing on sale at the Able Sisters’. They are:

Clothing items come in four colours — blue, green, red, or purple — and all four variants should be available to buy whenever each item is on sale. With no way to customise existing clothing, there doesn’t seem to be a rainbow variant like there is with the furniture.

Generally the Able Sisters will stock one or two out of the three every day, so unlike with the furniture, it’s not time-intensive to collect the full set if you want to.

If you’re looking for more on Animal Crossing: New Horizons, check out our guide to our favourite Dream Islands you can visit right now.

Or if you’re looking for funds to pay for all those pricey Festivale items, read our guide on selling Turnips and playing the Stalk Market.

The post Animal Crossing: New Horizons Festivale | Everything we know about Festivale, feathers, and more appeared first on VG247.