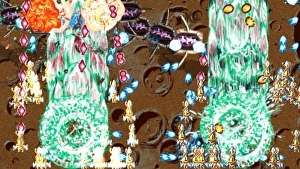 A remastered version of Shoot 1Up, a fan favourite shooter from Mommy’s Best Games which first launched on Xbox Live Indie Games over a decade ago, is coming to PlayStation 4 on February 11th.

Shoot 1Up is a shmup with a twist – instead of collecting 1Ups to use when you die, each one adds a ship which fights alongside you. Collect enough 1Ups, and you can have a total of 30 ships on screen at once – or 60 if you’re playing in couch co-op.

The DX version introduces two additional levels on top of the original’s eight, as well as higher resolution art and a performance boost to 4K 60fps.