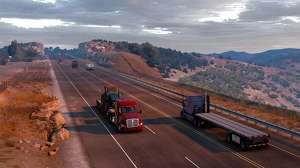 Developer SCS might still be hard at work on American Truck Simulator’s previously announced Wyoming expansion, but its eyes are already on the horizon, with the studio having now confirmed that Texas is next in line for the DLC treatment.

Texas will be the ninth state added to American Truck Simulator since its release in 2016 – following on from Arizona, New Mexico, Oregon, Washington, Utah, Idaho, Colorado, and the upcoming Wyoming – but it sounds like the expansion is still some considerable way off.

As explained in SCS’ announcement post on Steam, American Truck Simulator’s Texas DLC is still very early in development, and its sheer scale – Texas is the second largest state in the US, both by area and population – means it’s a significant undertaking for the team.