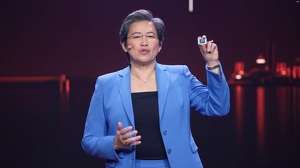 First up, the number of new mobile chips that debuted in the 40-minute conference was kind of insane. AMD announced 13 new processors, including 10 models with current-gen Zen 3 designs and three with last-gen Zen 2 chips instead, with the latter mostly at the bottom end of the lineup and costing less. Like last year’s Ryzen 4000 chips, the new processors are split into high performance (‘H’) and ultra-thin-friendly (‘U’) designs, with six or eight cores in the vast majority. If you’re familiar with AMD’s Ryzen 9, Ryzen 7, Ryzen 5 and Ryzen 3 naming scheme on desktop, you’ll be pleased to know that the same options exist here too – and if you’re not au fait, these are roughly analogous to Intel’s Core i9, Core i7, Core i5 and Core i3 processor families that offer enthusiast, high-end, mid-range and entry-level performance, respectively.

Every high performance H-series chip comes with 19 or 20MB of cache, around double that of last year’s Ryzen 4000 equivalents. H-series power targets (TDPs) vary from 35W to 45W, while the U-series parts hit 15W; as you might expect higher wattages provide increased performance but require thicker designs and drain battery life faster. The Zen 3 parts, which includes every H-series processor, should offer up to a 20 per cent improvement to single-threaded performance compared to their last-gen equivalents. That’s similar to the leap we saw between Ryzen 3000 and Ryzen 5000 on desktop, where AMD outperformed Intel’s best chips in some games for the first time in recent memory – so we expect very strong performance in the laptop space as well.