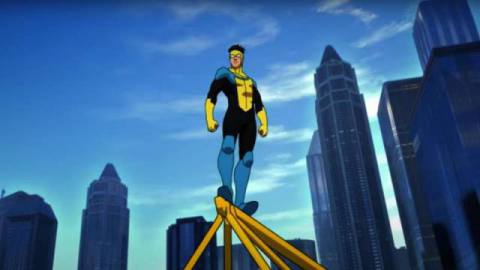 Robert Kirkman is best known for his comic series The Walking Dead and its subsequent television adaption. Soon, another one of Kirkman’s comics will be hitting your screen, this time as an exclusive to Amazon Prime. The new show is called Invincible, and Kirkman has announced that it will debut on March 26.

Between all of the games and movies that revolve around superpowers these days, you may have reached your saturation point when it comes to heroes in tights with special abilities. Even so, Invincible might be worth giving a chance. It’s about a young man named Mark who discovers he has superpowers, but he also happens to be the son of Omni-Man – a Superman-like figure who is the world’s most powerful hero. Check out the clip above for a sneak peek at the dynamic between the two characters, and get a broader look at the show with the teaser trailer.

If the concept alone isn’t enough to entice you, then maybe the phenomenal voice cast can lure you in. It features an astounding array of talent, including Steven Yeun (Glenn from The Walking Dead) in the lead role of Mark, and J.K. Simmons (J. Jonah Jameson in Sam Raimi’s Spider-Man trilogy) as Omni-Man. Other people lending their voices to the show include Mark Hamill, Seth Rogan, Gillian Jacobs, Jason Mantzoukas, Sandra Oh, Walton Goggins, Mahershala Ali, and more (including other alums from The Walking Dead). Check out the show’s Wikipedia page and soak in the star power.

Those on the Game Informer staff who have read the Invincible comic say that it is an under-appreciated work, and its quality may even surpass The Walking Dead. So, even if you’ve never heard of it before today, it seems like fans of superhero fiction should definitely have this upcoming series on their radar.