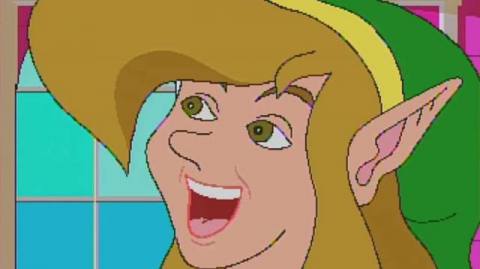 An amateur video game developer has remade CD-i games Link: The Faces of Evil and Zelda: The Wand of Gamelon.

Link: The Faces of Evil and Zelda: The Wand of Gamelon are two action-adventure video games developed by Animation Magic and published by Philips Interactive Media for the CD-i on 10th October 1993 in North America and 25th December 1993 in Europe.

And yet, for one amateur developer who goes by the name Dopply on Twitter, Link: The Faces of Evil and Zelda: The Wand of Gamelon were perfect games to learn how to use game engine GameMaker, and so, over the course of four years, both titles were given the remake treatment.

So, I decided to make re-imagined versions of the 1993 CD-i classics “The Faces of Evil” and “The Wand of Gamelon”. They are remakes using original assets, available for free download to play on Windows and Linux here:
Linux: https://t.co/x8Iur6mVor
Win: https://t.co/BG7kypiVxt

“I wanted to prove to myself that I could make a game,” Dopply said in a FAQ. “It started as a joke between friends, but then I wanted to see if I could actually pull it off. I’ve flirted with game making for a while but never finished something. This was my chance to do that (well, over the course of four years, I guess). Over time, remastered versions of these notorious titles was something I wanted for myself as well.”

Dopply’s Link: The Faces of Evil and Zelda: The Wand of Gamelon include widescreen mode, remastered mode for less frustrating play, subtitles, touched up sprites, and unlockables. The games were remade from scratch, so movement, enemy spawns and various other bits and bobs are different. But the remakes are based on the originals and mimic them closely. “I did my best to create what I think a modern release of these games would look and play like,” Dopply explained.

“I definitely underestimated the challenge (after all, it took me about four years in my spare time),” Dopply continued. “Thankfully, the nature of the originals made a remake using the original assets easier to pull off and hide some of the coding amateurity that I’d definitely redo if starting from scratch nowadays. But that was the whole point, really, to go through an entire ‘simple’ game from beginning to end and see if I could replicate it and improve it.”

So, what does Dopply think of the games themselves?

“I think they’re alright. These new versions definitely improve them, in my humble opinion. They have a terrible reputation, save for the hilarious cutscenes (which I adore and never got old throughout hundreds of hours of testing, by the way) but as far as games, if you give them non-horrific control schemes and decent performance, they’re fine. As a connoisseur of bad and weird games, I’ve most definitely played worse.

“I also think the background art is genuinely gorgeous, and the music is fantastic. I’m excited for people to experience the excellent soundtrack for the first time.”

I’ve seen plenty of love for Dopply’s project on social media, despite the reputation of both games among Zelda fans. And it seems the response has taken Dopply by surprise, too.

Gotta say, it feels surreal to have so many people and places I’ve been fans of for a while like my release. Well maybe not “like”. More like bewildered by its existence lmao

The natural thought is Nintendo may issue Dopply with a cease and desist, as it is so fond of doing. But if it did it would by default be acknowledging a couple of games I imagine it would rather forget. So perhaps Dopply’s safe with this one.