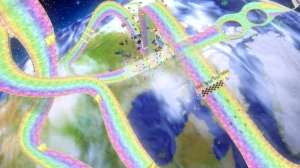 Getting good at Mario Kart involves learning all the shortcuts: the ones Nintendo hides just out of view behind trees or waterfalls, and which might give you a small edge on your rivals as the finish line nears. But there’s another class of shortcut altogether – ones dubbed “ultra shortcuts” by fans keen to break Mario Kart as much as possible by performing crazy stunts Nintendo had never intended.

Ultra shortcuts require frame-perfect timing, or knowledge of hidden geometry which bestows weird effects. And while you can pull these off using tool-assisted gameplay, the holy grail has been to achieve them manually. It just takes practice, and many, many attempts.

Today, French Mario Kart fan ArthuurrrP has been credited with being the first person to pull off Mario Kart Wii’s final ultra shortcut – one which has been known about for years but only ever completed in tool-assisted runs.