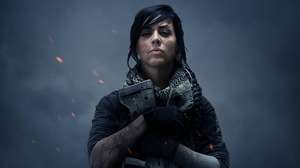 The suit has been filed by Clayton Haugen, described as a photographer, videographer and writer, who claims his character of “Cade Janus” was copied by Activision to create Call of Duty operator Mara. According to the lawsuit, Haugen created Cade Janus as the central character for a short story called November Renaissance he hoped would be made into a film (thanks, TorrentFreak).

Back in 2017, Haugen hired streamer Alex Zedra to portray the character in several photographs, which were shared on social media and sent to film studios, but Haugen claims these photographs were used by Activision as a guide for the creation of Mara. Haugen also says Activision actually hired Zedra to scan her likeness for the game. The lawsuit claims Activision hired the same makeup artist to reproduce the look down to the “same hair extension”, and requested that Zedra ask Haugen for the same clothing worn in the original photoshoot.