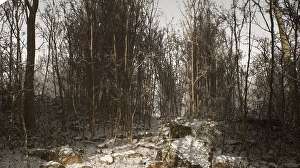 Whispers the Dutch studio was working with the legendary Metal Gear Solid creator were sparked by a teasing reveal of its new project Abandoned on the PlayStation blog yesterday – and fuelled by Kojima fans curious who the little-known Blue Box Game Studios really was.

Abandoned is described as a cinematic survival sim, set in a snowy and ultra-realistic looking wilderness. Its first teaser, below, received praise for its visuals and creepy setting – with parallels to Silent Hill’s atmosphere being drawn.