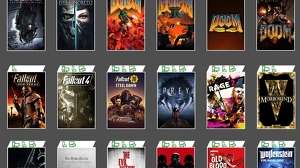 As part of a lengthy and largely revelation-free “roundtable” event this evening, Microsoft and Bethesda have announced that 20 Zenimax Media titles will be making their way to Game Pass on Xbox, PC, and Cloud from tomorrow, 12th March.

It’s a big old list, bringing some absolutely massive titles over to Microsoft’s subscription service from all across Zenimax’s studios. id Software’s seminal first-person shooter series Doom gets a lot of love, for instance, with the Game Pass arrival of the original 1993 Doom, Doom 2, Doom 3, Doom 64, and Doom Eternal, alongside id’s post-apocalyptic shooter Rage 2.